The husband murdered his wife by killing him on Facebook Live. The accused husband landed on a brutal scene from a Facebook ID named Tutul Bhuiya on Wednesday afternoon at around 1 pm. Police have arrested her husband for the murder after the incident. His full name is Obaidul Haque Tutul Bhuiyan. The victim of the brutal name is Tahmina Akhter.

In the video, Tutul says before the killing, his family was destroyed for one. She left her daughter at the age of 6 months. His whole life has been ruined by his wife, who at one point was angry at his wife for his anger. Immediately after the beating, the sufferers became depressed। 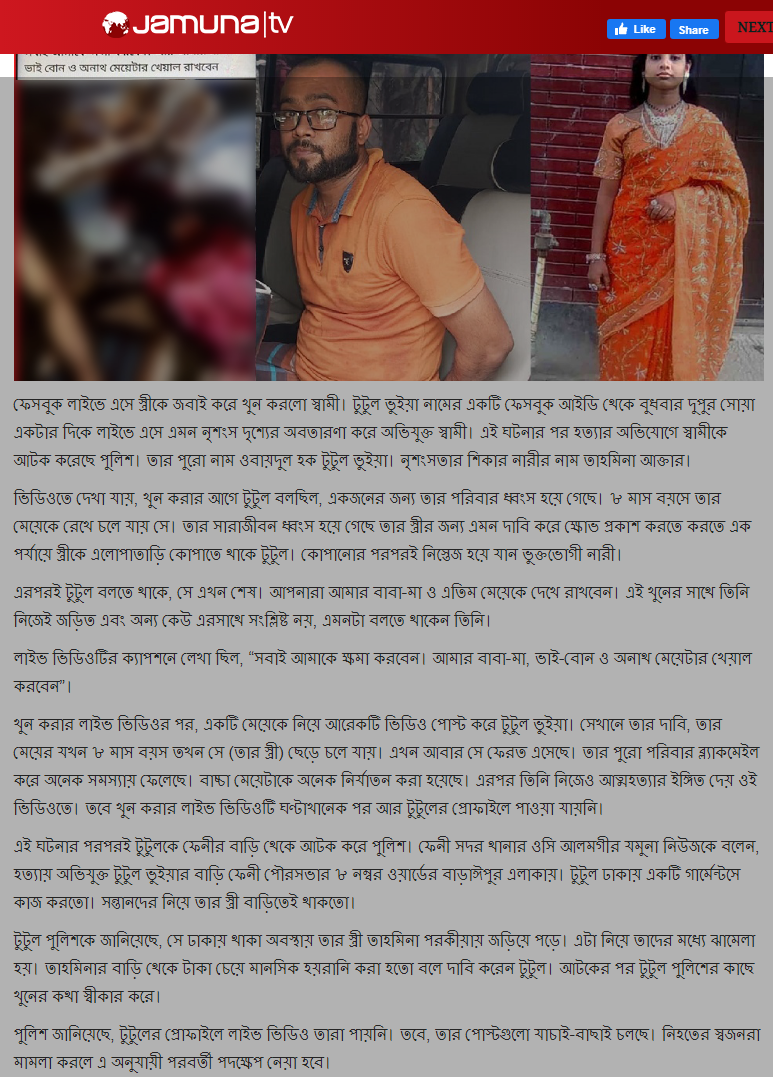 Then Tutul goes on to say that he is finished. You will see my parents and orphan girl. He himself is involved in the murder and no one else is involved.

The caption for the live video was written, “Everyone will forgive me. My parents, siblings and orphans will take care of the girl. ”

After the live video of the murder, Tutul Bhuiya posted another video about a girl. There, he claims that when his daughter is 6 months old, he (his wife) leaves. Now he’s back again. His entire family has had a lot of trouble with blackmail. The baby girl has been tortured a lot. Then he himself indicated the suicide in that video. However, the live video of the murder was not found on Tutul’s profile after hours.

Police arrested Tutul from Feni’s house shortly after the incident. Feni Sadar Police Station OC Alamgir told Jamuna News that the house of Tutul Bhuiar, accused of the murder, was in the Baraipur area of ​​ward no.1 of Feni Municipality. Tutul worked in a garment factory in Dhaka. His wife stayed home with the children.

Tutul told police that his wife, Tahmina, was involved in an alien while he was in Dhaka. This is a problem for them. Tutul claimed that Tahmina’s house was being harassed for money. After his arrest, Tutul confessed to the murder.

Police said they did not find a live video on Tutul’s profile. However, his posts are under scrutiny. If relatives of the deceased file a case, the next step will be taken accordingly.